Posted by Richard Freed on March 29th, 2015 in Tech Parenting, Technology and Family 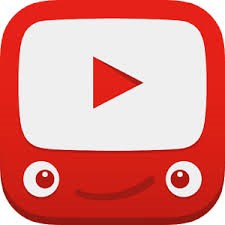 Two-year-old Francisco spends 6 hours a day on a smartphone, summoning Ninja Turtles episodes with the swipe of his finger. He prefers technology to playing in his backyard, as his mom says, “He’ll have tantrums if we take the phone away.” Francisco’s tech-heavy life is described in the recent San Jose Mercury article “Toddler tech: Is all that YouTube good for them.” The article describes the launch of Google’s new YouTube Kids service, the first Google product aimed at little kids. The service offers large bold icons and Google says “it’s fast and simple for little thumbs to navigate,” even if kids can’t spell or type.

These selling points sound much like those for another tech product which promised parents “Peace! Quiet!” and claimed it’s great for “keeping small fry out of mischief… and out of mother’s hair,” yet will help kids become “more interested in schoolwork” and get “better marks in school.” Such claims are actually from a 1950 advertisement (below) promoting what was then the most modern in high-tech screen devices: a Motorola television set. Unfortunately television, on the whole, has not educated children well. While kids can learn from limited exposure to educational programming, American kids typically spend long hours watching entertainment TV that displaces reading and homework. The result? TV generally detracts from academic success. 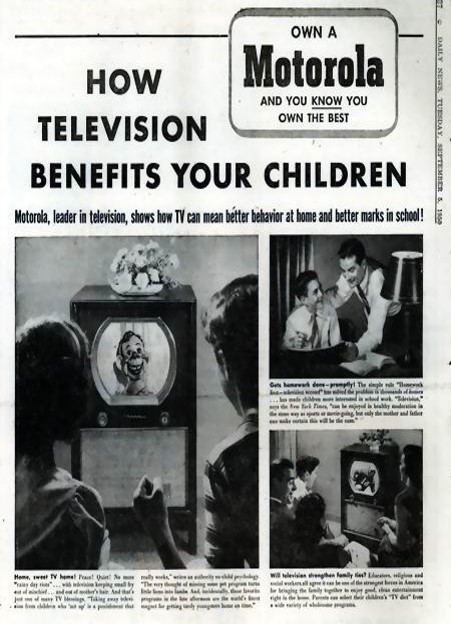 Today’s kids use of technology is also heavily entertainment-focused. According to the Kaiser Family Foundation, children spend 5½ hours each day with amusement based screens—including video games, online videos, social networks, and TV—while spending only 16 minutes a day using the computer at home for school. (Teens somehow manage to spend an additional 2½ hours texting and talking on the phone.) Studies show that the more time kids use amusement-based technologies, such as video gaming and social networking, the less well they do academically.

Our kids’ immersion in screen amusements is beginning earlier in their lives, with the average preschool-age child now watching more than 4 hours of television and video content each weekday—increasingly on mobile devices. What’s driving our kids’ extremely high levels of entertainment screen use? One reason is that providing kids mobile devices gives them more opportunities to watch TV—basically anywhere, anytime. According to the Kaiser Family Foundation: “Being able to access TV online and on mobile platforms [including iPods and smartphones] has led to a substantial increase in the amount of time young people spend watching, to a total of just about 4½ hours a day (4:29), nearly 40 minutes more than 5 years ago (3:51).”

There are costs. The National Scientific Council on the Developing Child at Harvard University recently said that young children frequently left for hours at a time in front of the TV are prey to a type of understimulation that can damage brain development. Today’s parents may recognize why using television this way may be bad for children, however, they may be swayed by promises of a high-tech babysitter in the form of a tablet or smartphone. Yet often young children engage in exactly the same activity, watching TV (or its equivalent), on mobile devices.

I realize that parents need a break from the difficult tasks of raising young children. I also understand that many families are burdened financially, and struggle to afford traditional childcare options such as preschool, and that today’s mobile devices—which have an uncanny ability to occupy children for hours at a time—are a tempting alternative. That being said, parents making decisions about their young kids’ use of technology need to be aware of the realities of how mobile technologies are typically used by children. And all of us—including tech giants bursting with revenue—should be looking for better ways to care for our children.

Next post: Kudos to Simplicity Parenting and the CCFC