One Hundred Sixty Social Media Friends—but Lonely, Depressed, and Cutting on Herself 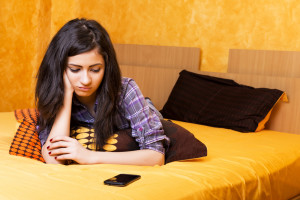 Thirteen-year-old Kelly’s parents brought her to counseling because she was cutting on herself with a razor. The teen girl told me that cutting’s physical pain distracted her from feelings of emptiness. A month into treatment, Kelly revealed why she was suffering in a session attended by her parents. “I’m lonely,” she cried.

“How can you be lonely?” her mother asked. “You’ve got so many friends that you chat on your phone with day and night.”

Kelly actually had more than 160 online friends. But she could have had 1000 and it wouldn’t have helped her. That’s because Kelly had lost the most important contributor to her well-being: a loving bond with her parents.

Victim of a Tragic Myth

Kelly’s parents loved their daughter very much and were determined to help her grow up happy and healthy. When Kelly was young, her parents understood that she needed lots of time with family. “I would cook with my mom and joke around with my dad,” Kelly told me of her life growing up. Yet, as Kelly approached middle-school-age, her life changed dramatically because of a dangerous belief: the myth of detachment.

This widely-accepted, modern-day myth suggests that teens (and even preteens) should immerse themselves in social media, texting, and other online forums to connect with peers, and to develop their identities and independence. In this interpretation of adolescence, the importance of parents, teachers, grandparents, and other adult caregivers is minimized. If they have any role, it’s to make sure that teens have 24/7 access to digital devices.

As Kelly started middle school, her parents believed that she should begin shifting bonds from parents to peers, and that getting her a smartphone would help this along. Three months into 6th grade, Kelly’s parents were referring to her as “the ghost,” as she spent her days in her bedroom conversing with cyber-world peers from across the nation.

As Kelly reached the 7th grade, the once cheerful girl had turned sullen. Her parents tried to preserve family moments by asking her to leave her phone behind. “But I need my phone!” Kelly would lash out, claiming that her online friends were the only thing that made her happy.

Unfortunately, Kelly’s attempts to get support from online peers did more harm than good. The kids she talked to were often too caught up in their own lives to help her. Instead of listening to Kelly, they talked about their own troubles.

And during her 8th-grade year, Kelly’s chance meeting with a troubled teen in an online depression forum led her down a destructive path. In spite of Kelly’s own struggles, she spent endless hours trying to talk this peer—who lived more than a thousand miles away—out of killing herself. Sadly, it was this peer’s insistence that cutting helped her which led Kelly to start cutting herself.

Kelly’s peers failed her for no fault of their own—teens simply aren’t meant to parent one another. Sure, teens should have friends, and close ones at that. But teens need their parents more than peers. Why? Critical brain and hormonal changes during adolescence lead to high highs, but low lows. Academic demands and relationship problems can become overwhelming. Parents—who have much more developed brains and greater life experiences than peers—are better able to help teens navigate these tough times.

Gordon Neufeld and Gabor Maté, in their book, Hold On to Your Kids, also illuminate that parents invest in their children in a way that peers never can. Most of us would give our lives for our kids. In contrast, the strongest-appearing peer relationships can evaporate over the course of a few hours.

Social media users also can experience fear of missing out, social comparison, and cyberbullying problems. The toxic mix of online negativity and disconnect from family is too much for many teens. A recent study found that kids (grades 7-12) who use social media for more than two hours a day are more likely to have high levels of psychological distress and thoughts of killing themselves than kids who spend less time on social media.

Give Teens the Families They Need

Kelly’s parents realized that they had ignored their instincts to remain involved in their teen daughter’s life. To help Kelly, they provided her strong tech/phone limits. Kelly protested but her parents stuck with it. This encouraged Kelly to come out of her room and engage in family activities such as preparing meals.

Not all of the changes were easy for Kelly, as it’s harder to bring teens back into the family fold than to have them maintain a strong bond with parents. Opening Kelly’s eyes was her parents’ determination to stand by her—even when things got rough. Deep down she understood that her family loved and supported her in ways that her online life never could.

Next post: What One Boy’s Story Tells Us About Video Game Addiction