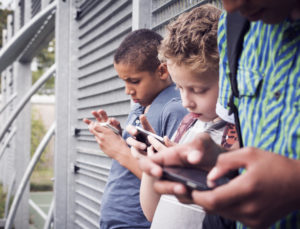 A troubling new digital divide is emerging: Children in more affluent areas are spending much less time on screens and phones than kids in less advantaged communities. New York Times’ writer Nellie Bowles interviewed me for her powerful article: “The Digital Gap Between Rich and Poor Kids Is Not What We Expected.” Families that have access to more resources are choosing to decrease the amount of time kids spend on screens and phones because of increased recognition of risks to kids’ emotional well-being and academic success. Lower-income communities need to be provided access to the same resources or we risk increases in already troubling income and racial achievement disparities.

Previous post: Why do kids struggle to look up from devices? The answer is persuasive design.