Posted by Richard Freed on September 16th, 2014 in Being Productive with Tech, Tech Parenting 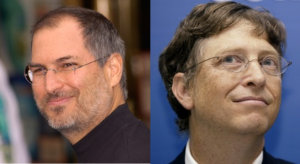 In the recent New York Times’ article “Steve Jobs Was a Low-Tech Parent,” technology writer Nick Bilton describes a 2010 phone call he had with Steve Jobs, Apple’s then C.E.O. Bilton asked Mr. Jobs how his kids were enjoying the recently released first-generation iPad. “They haven’t used it,” Jobs replied, “We limit how much technology our kids use at home.” If the Jobs’ household wasn’t bathed in gadgets, how did the family spend time? Walter Isaacson, who wrote Mr. Jobs’ biography and who spent a great deal of time in the Jobs’ family home, observes, “Every evening Steve made it a point of having dinner at the big long table in their kitchen, discussing books and history and a variety of things…. No one ever pulled out an iPad or computer.”

The Jobs’ parenting style is similar to that of Microsoft co-founder Bill Gates and his wife Melinda. In the Reuter’s article, “Bill Gates keeps close eye on kids’ computer time,” the Gates parents are reported to have set strict limits on their daughter’s gaming, and their son had his own screen limits. Bill Gates joked, “My son said, ‘Am I going to have limits like this my whole life?’, and I said, ‘No, when you move away you can set your own screen limits.’”

If both the Jobs’ and Gates’ families set strict tech limits, what type of parenting is employed by other tech industry leaders? In Mr. Bilton’s interviews with a number of technology chief executives and venture capitalists, he found this same parenting strategy quite common, noting many “strictly limit their children’s screen time, often banning all gadgets on school nights, and allocating ascetic time limits on weekends.” For example, Chris Anderson, the former editor of Wired and now the C.E.O. of the drone maker 3D Robotics, described why he and his wife set strict technology limits, noting it’s “because we have seen the dangers of technology firsthand. I’ve seen it in myself. I don’t want to see that happen to my kids.” Anderson’s concerns for his kids include being subjected to bullying online and the potential for developing a technology addiction. The types of screen limits Bilton found commonly used by tech industry leaders include:

These parenting practices clearly differ from those applied by most American families. The latest Kaiser Family Foundation media/tech study measured US parents rules for kids’ use of video games, computers, and TV and found: “The majority of 8- to 18-year-olds say they don’t have any rules [emphasis mine] about the type of media content they can use or the amount of time they can spend with the medium (there is one exception—a bare majority of 52% say they have rules about what they’re allowed to do on the computer).”

Why is the parenting approach applied by many tech leaders dramatically different from that typically provided US kids? As Bilton notes, “These tech C.E.O’s seem to know something that the rest of us don’t.” I believe their insiders’ knowledge inoculates them from being deceived by industry marketing promising the benefits of immersing kids in phones and tablets. They understand the reality of how American kids use technology: that kids’ tech use is dominated by long hours spent with entertainment technologies—including video games, online videos, and texting (according to the Kaiser Family Foundation, an incredible 8 hours a day)—while kids spend only 16 minutes a day using the computer at home for schoolwork. These tech leaders also recognize that all these playtime gadgets can distance families, hurt academic success, and pose the risk of addiction.

I therefore suggest parents will benefit from paying attention to the contrasting messages coming out of the tech industry. On one hand, industry marketing claims that it’s vital we load kids up with ever more devices, and that video games, social networks, and texting promote kids’ happiness and success. On the other, tech industry leaders speak volumes through the strong steps they take to limit their own kids’ use of devices. Which counsel will you choose when raising your kids?

Next post: Does the Film “Look Up” Speak to Science?